This knife is made by hand, so the delivery is about 4 weeks

A Meeting of Minds

Manu Laplace and Stéphane Alsac first unveiled fruits of their collaboration at the 2015 Game Fair. A collection of four 1515 pocket knives inspired by Stéphane Alsac’s works of art. They were an immediate hit.

This project began with a meeting of minds, two artists passionate about doing a great job. Manu Laplace’s reputation proceeds him, he is well known among hunting knife enthusiasts and is one of the best knife makers in Thiers, a town famous for it’s cutlery makers. Manu is an artist; his knives are always a work of art, a blend of original materials, colour and history. His knives are for touching, hearing, feeling…

When these two artists, both fanatical about their work, met for the first time, they spent hours chatting and exchanging ideas about their respective passions. As is often the case this lead to a project, a partnership formed bringing together their individual styles and desires.
“Working with Manu was a moment of pure joy, the kind of moment where nothing is more important than the creation, the desire to create a beautiful object and show it to the world.”
Stéphane Alsac

This is how the “1515-Alsac” collection was conceived: four knives : Buffalo, Elephant, Leopard, Lion, four watchful eyes. On the right side you’ll find the extremely realistic gaze of an animal, painted in oil. On the reverse side the animals are found in their habitat; each composition fits perfectly with the contours of Manu’s knife.

Plus d'infos
* PVD: Physical Vapour Deposition : Physical vapor deposition (PVD) describes a variety of vacuum deposition methods which can be used to produce thin films. PVD uses physical process (such as heating or sputtering) to produce a vapor of material, which is then deposited on the object which requires coating. **Liner lock : The Linerlock is a locking mechanism for folding pocket knives. A Linerlock is a folding knife with a side-spring lock that can be opened and closed with one hand without repositioning the knife in the hand. The lock is self-adjusting for wear.
Livraisons et retours 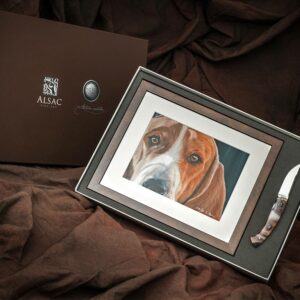 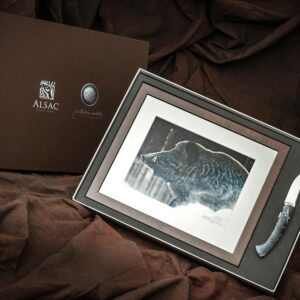 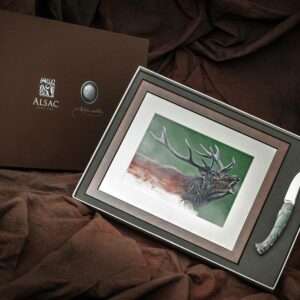 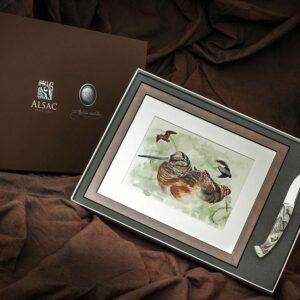