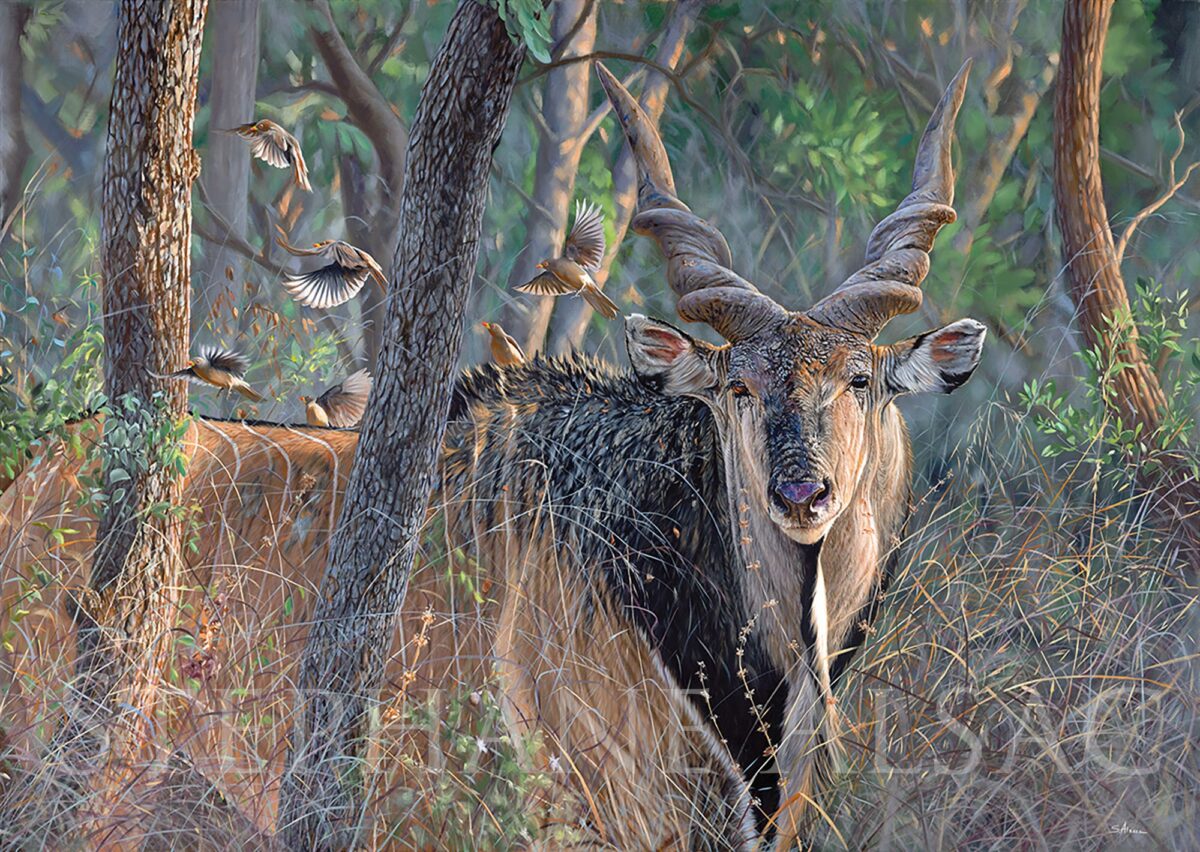 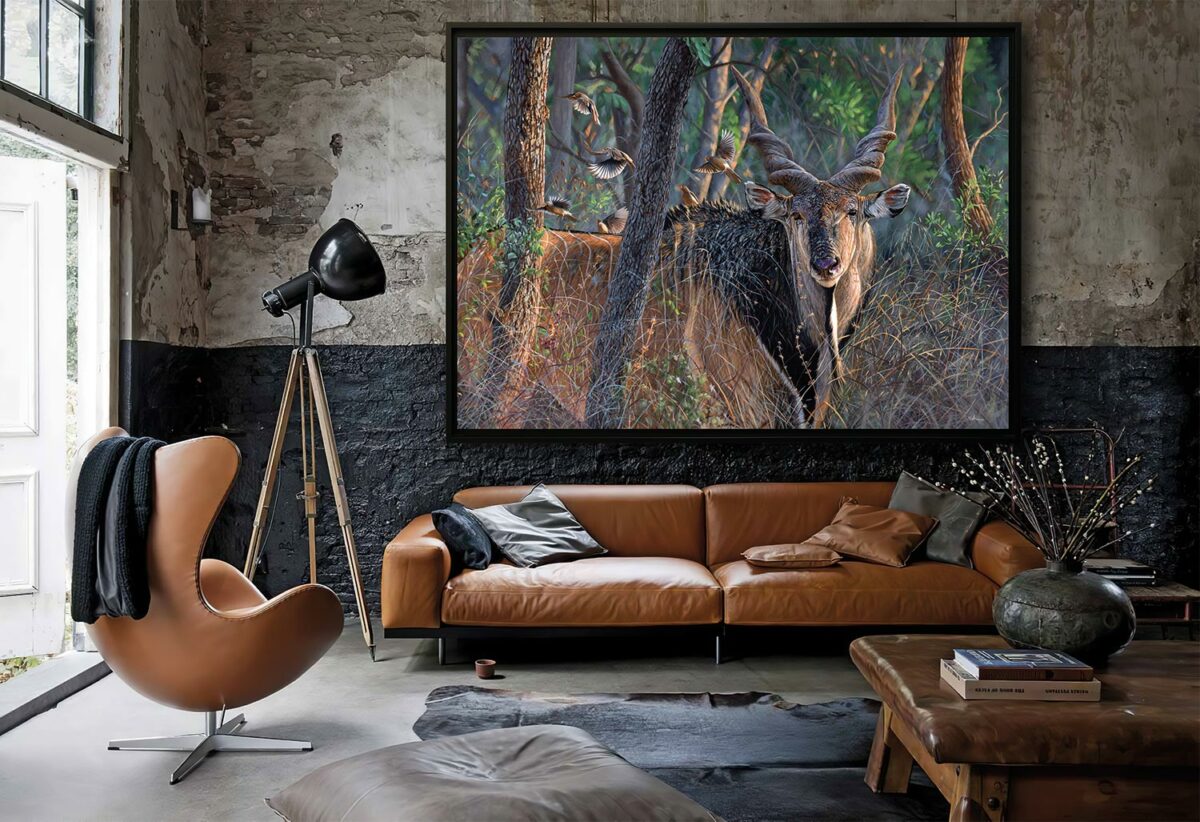 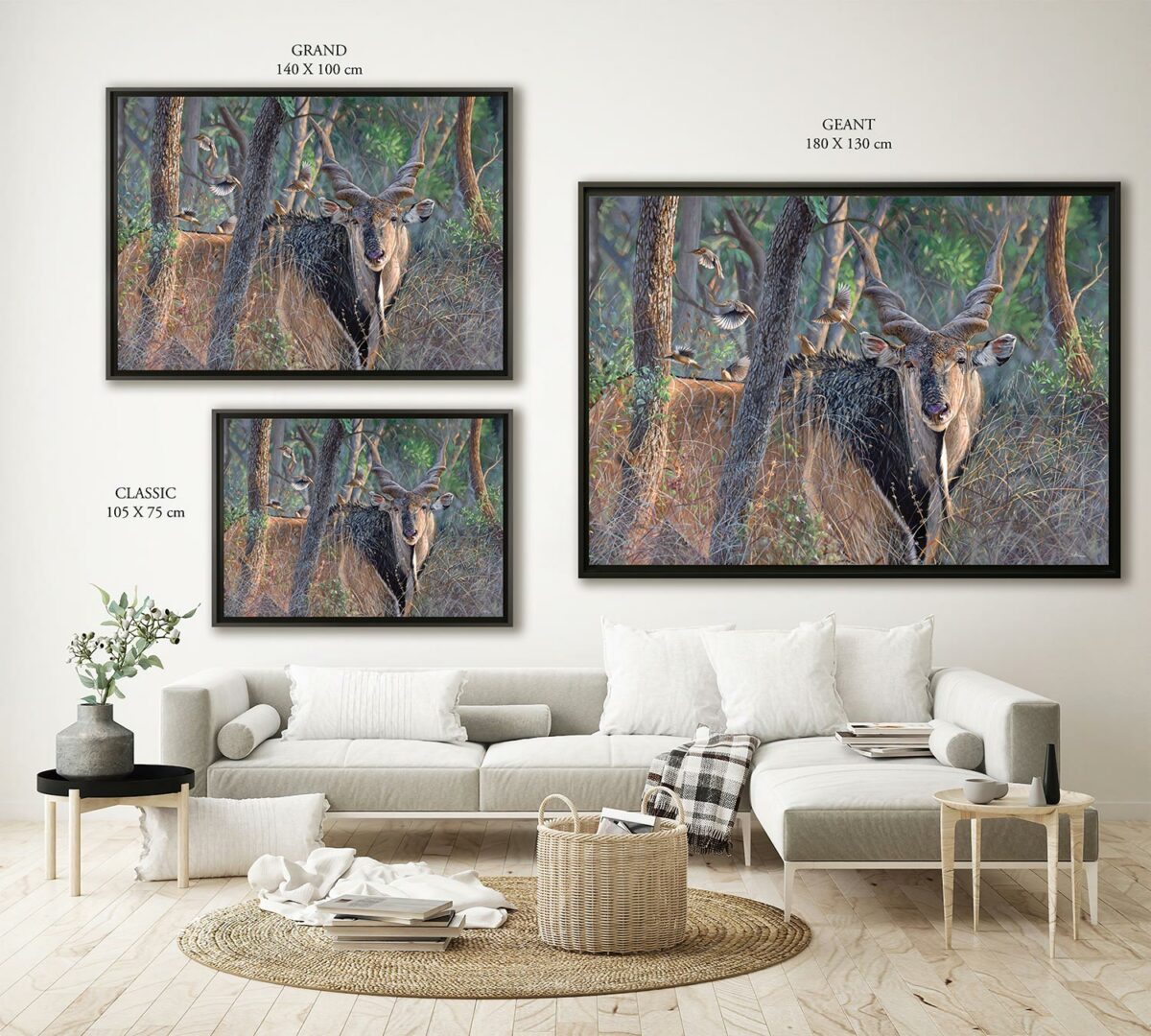 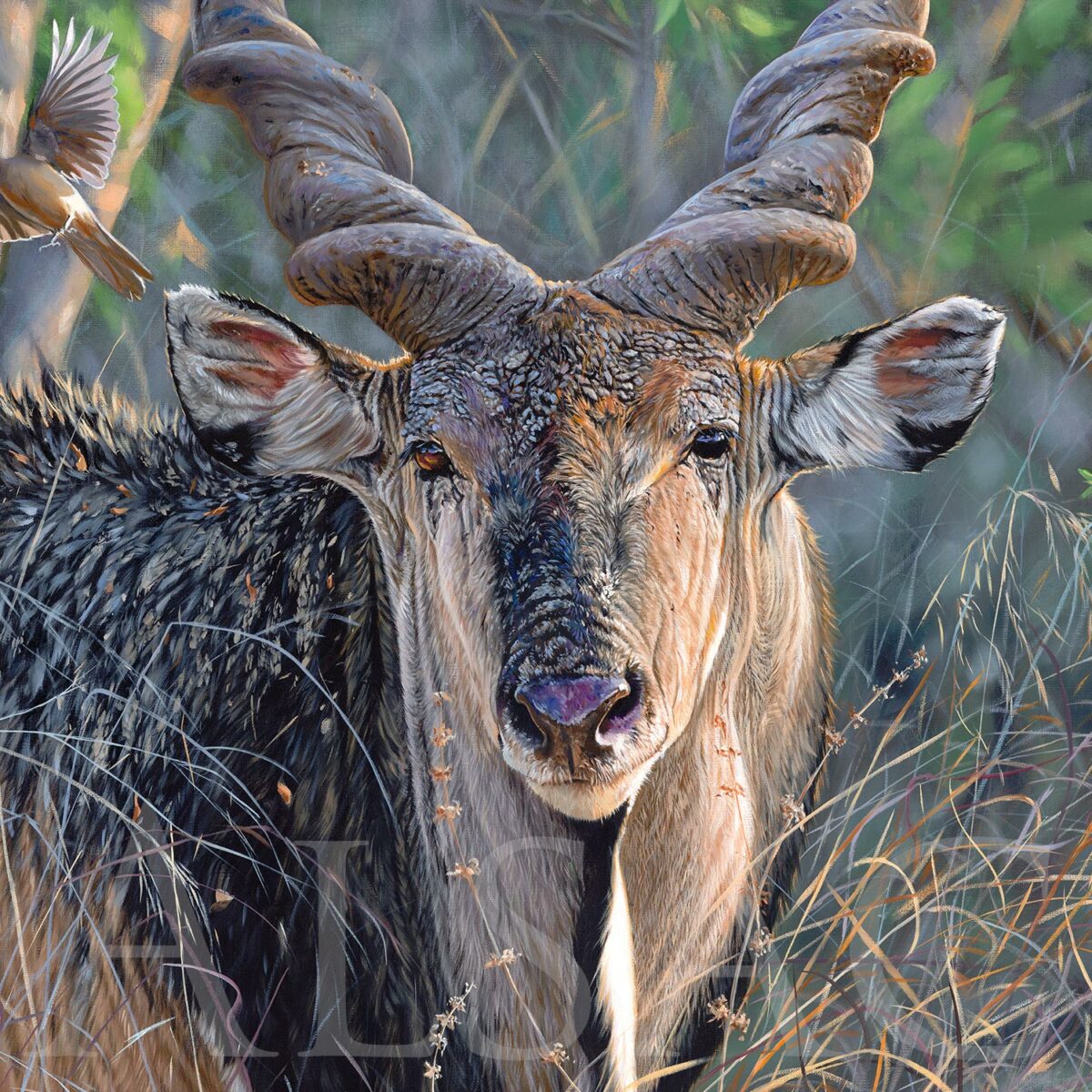 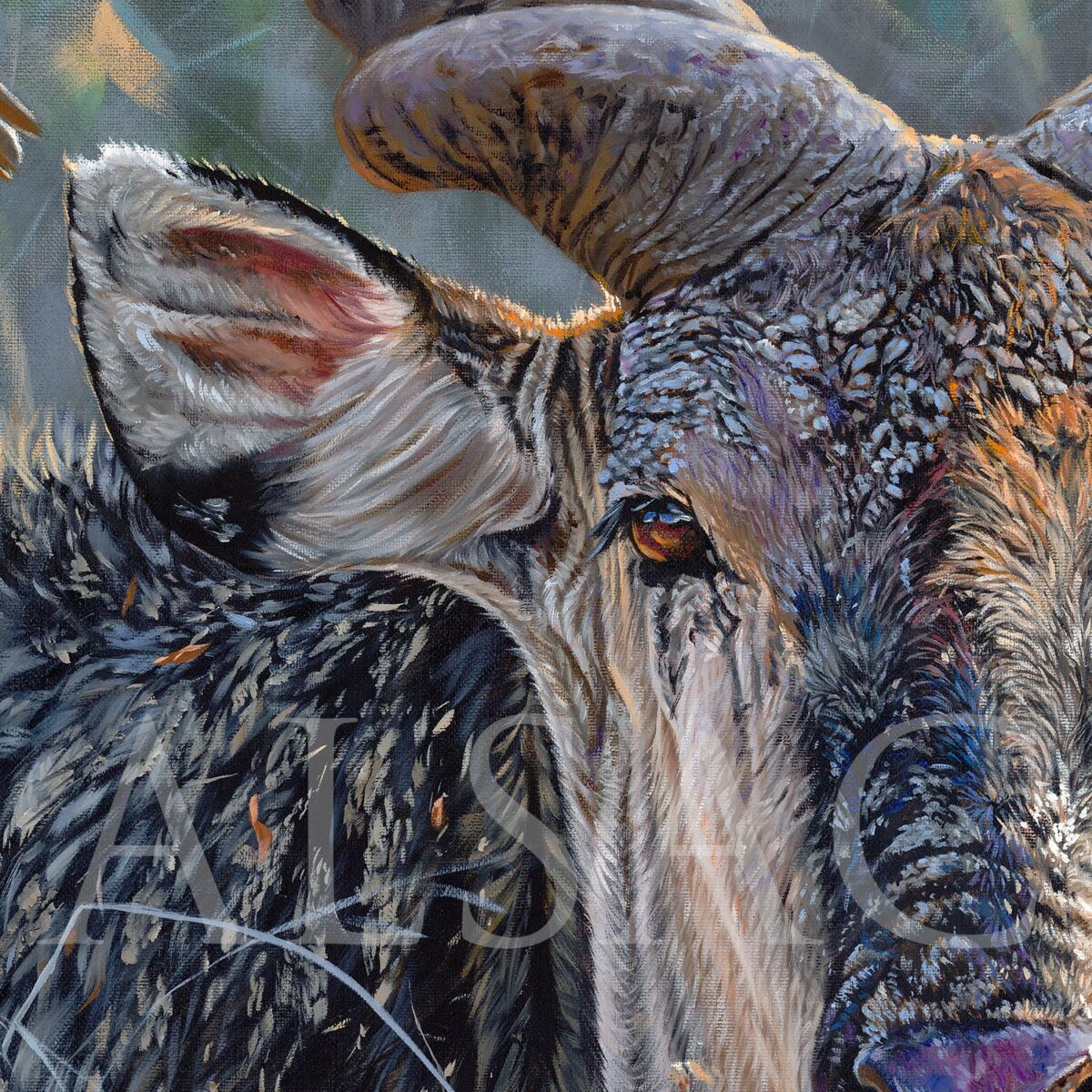 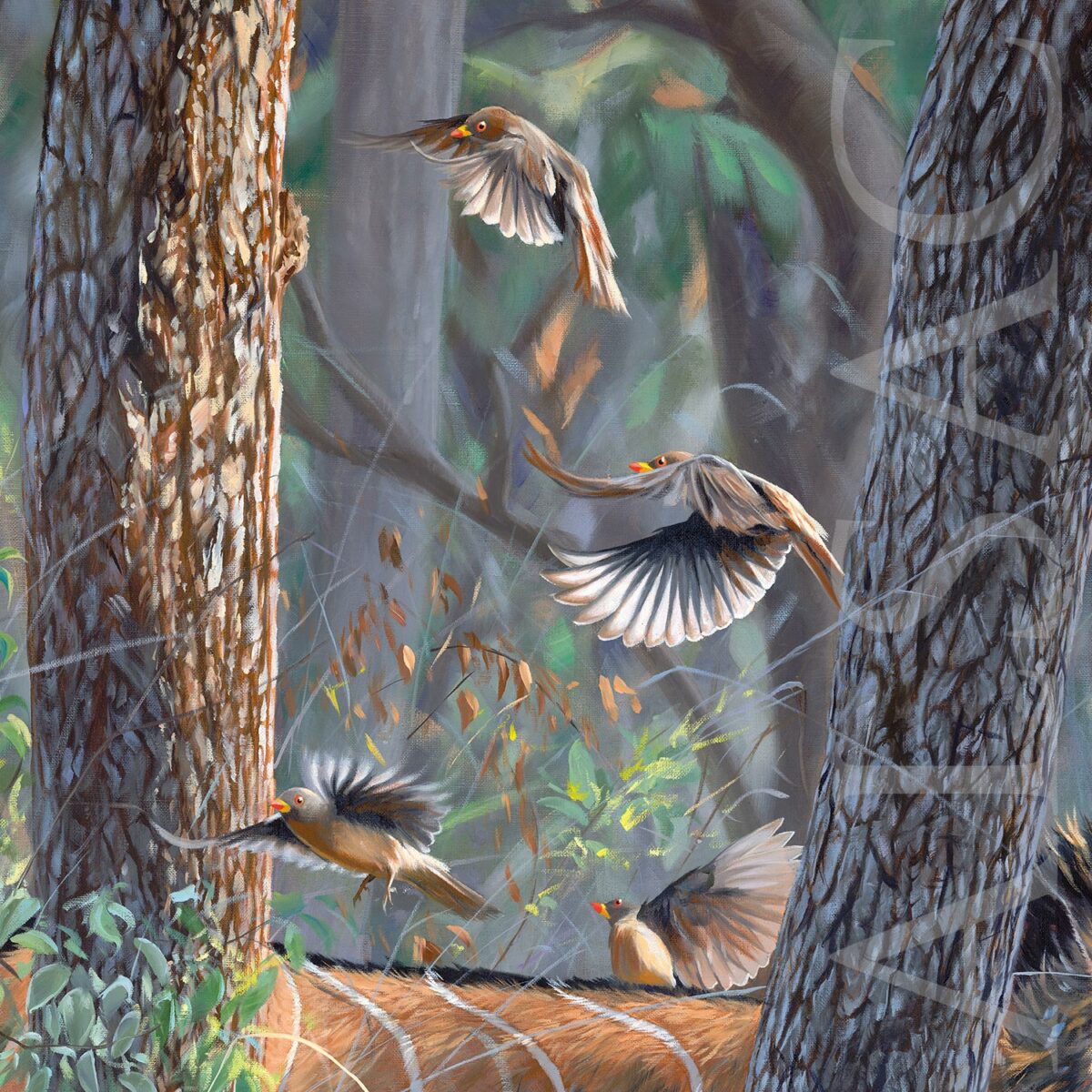 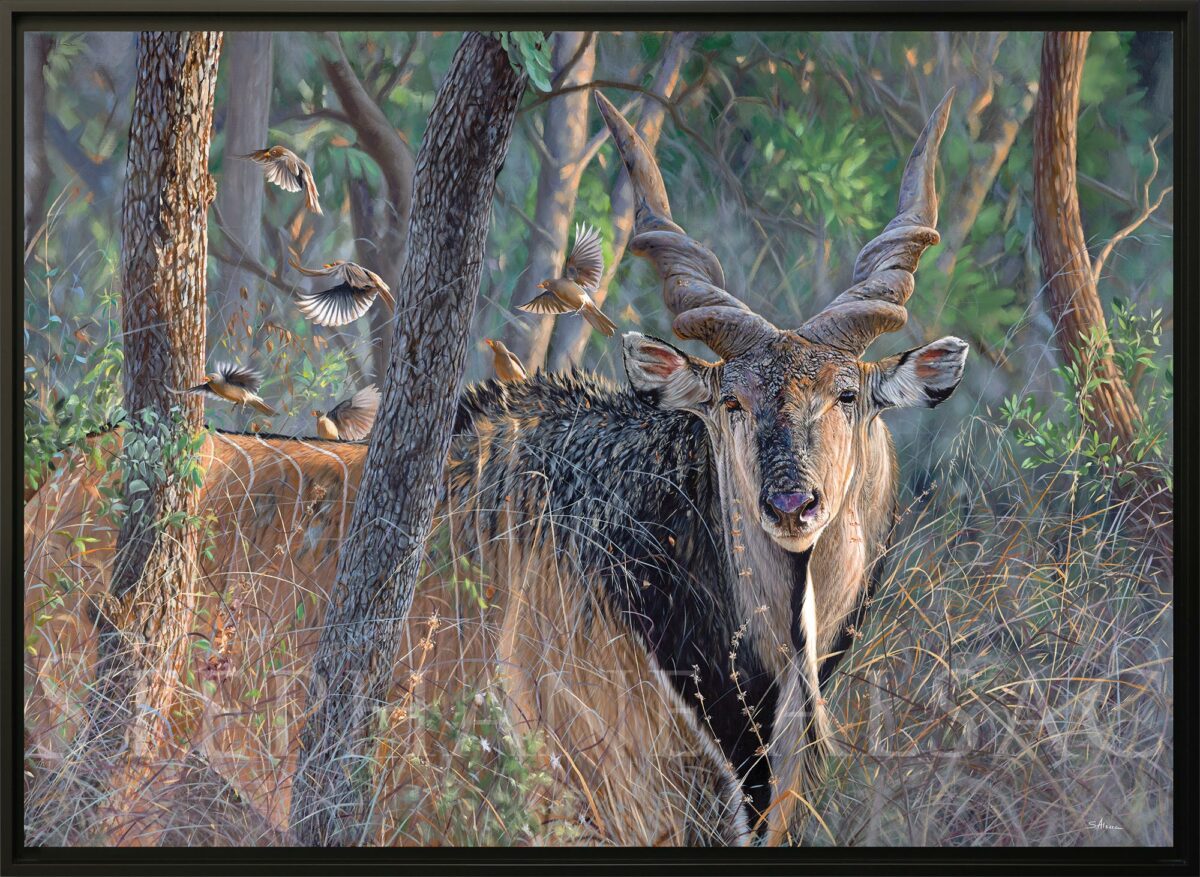 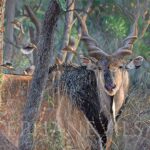 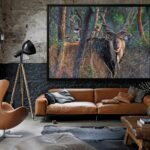 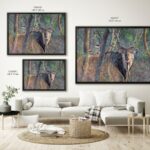 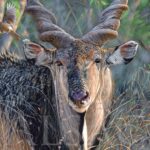 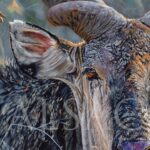 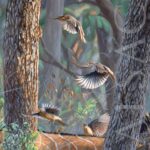 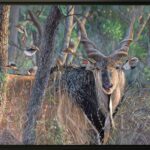 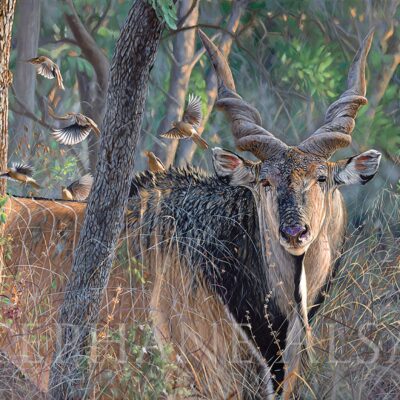 The Print is numbered and signed with a certificate of authenticity. There are two signatures : the original painting signature which is printed and the signature of the print by the Artists’s hand.

The watermark does not appear on the print.

The Giant Eland is a mythical animal and meeting it doesn’t leave you unscathed. It has even become a passion for some. This is the case of my client who commissioned this painting from me.

It was in his company that I set off on the Eland de Derby track in the Faro reserve in Cameroon. the Taurotragus Derbianus is the largest antelope in Africa and is now classified as “vulnerable”. Little known to the general public and very far from the superficial considerations of junk “environmentalists”, it owes its survival today in the wild only to the relentless fight against poaching carried out and financed by conservationist hunting companies.

It took me long hours of walking, over 10 days, to have the chance to observe the “Phantom” as it is also called. Because the Derby Eland is not easily approached, the sentinel females are watching on all sides and the slightest noise or smell scares them away at full gallop, putting 2 to 3 hours of additional walking between us.

In the end, I wanted to immortalize in this painting first of all the fleeting vision of this elegant Giant seen between the trees of a very wooded savannah. Then, I tried to transcribe the atmosphere of the end of the day, at the end of an exhausting day of hunting, a moment of unreal magic. Finally, I hope that this painting conveys the excitement and the emotion that were mine at this intense moment when I met The “Lord Derby Eland”.

Stéphane Alsac is a contemporary hyper-realistic painter. His paintings, most often oil paintings, represent animals with an astonishing realism close to photography. The idea here is not to reproduce a photo, but to sublimate the animal and make it “more real than life”.

You want to immortalize a moment, a memory of Safari, order an Original Painting in the size that suits you and in the painting style that you like.

Contact Stéphane Alsac to discuss your painting project with him. He will define with you the animal subject meeting your expectations which will sublimate your interior.

You've just added this product to the cart: